I was playing a game I got addicted to some few weeks ago during my boring and very tired moment
called candy crush, it’s gave me a very good feeling of winning and losing, it came to a time they
started giving me update of people playing at the same time and encouraging me to have a higher
score than them, the drive was so strong, I kept playing the game like there is a prize attached to it (
anyway It gives me a good feeling), then they brought me a particular deal to win a crown, the deal was
meant to stay for 12 hrs, the deal was for me to win the crown by using just a life to go through the 5
levels… it was fun in the first place, then it become a task, I was so desperate win so as to enjoy the
benefit that comes with the crown, they continuously notify me of others winning the crown, haaaa!!!
This one no go pass me by ooo, I said to myself, then after 8 hrs I got the crown…you could imagine
the feeling, I shouted YES!!! at around 3am, my eyes were heavy but i was suppose to be online to get
my crown, I still have some hrs left I said, I will do that first thing tomorrow morning, let me grab some
sleep, then I woke up late, rushed to dress for work and do the necessary early morning things at work,
ehnehn, let me now get my crown I said when I had a very short spare time, Lo and below the crown
has gone, the time elapse so I couldn’t claim the crown… I felt so bad, I procrastinated just a step to
take the crown and then I had nothing to show for it, no evidence of victory.
Why this epistle? That is how life treat us or should I say we treat life for ourselves, we are all running
for a race to get the reward, some will get, some wouldn’t, we are so hardworking, spirit filled ( I forgot
to mention that I started speaking in tongues at a point when I kept loosing at the last stage) we’ve
prayed, talk, network, we have all the encouragement and support from family, friends, colleagues, who
wanted to keep u going or actually kept you going but just a little more from us, just a step from us, just
a process takes it all away even when we had win but we had no evidence to show for it.
Why not try more?
Why procrastinating?
Just a little more would have make a whole lot of senses…. Hmmmm

5 thoughts on “My Candy Crush Experience” 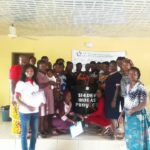