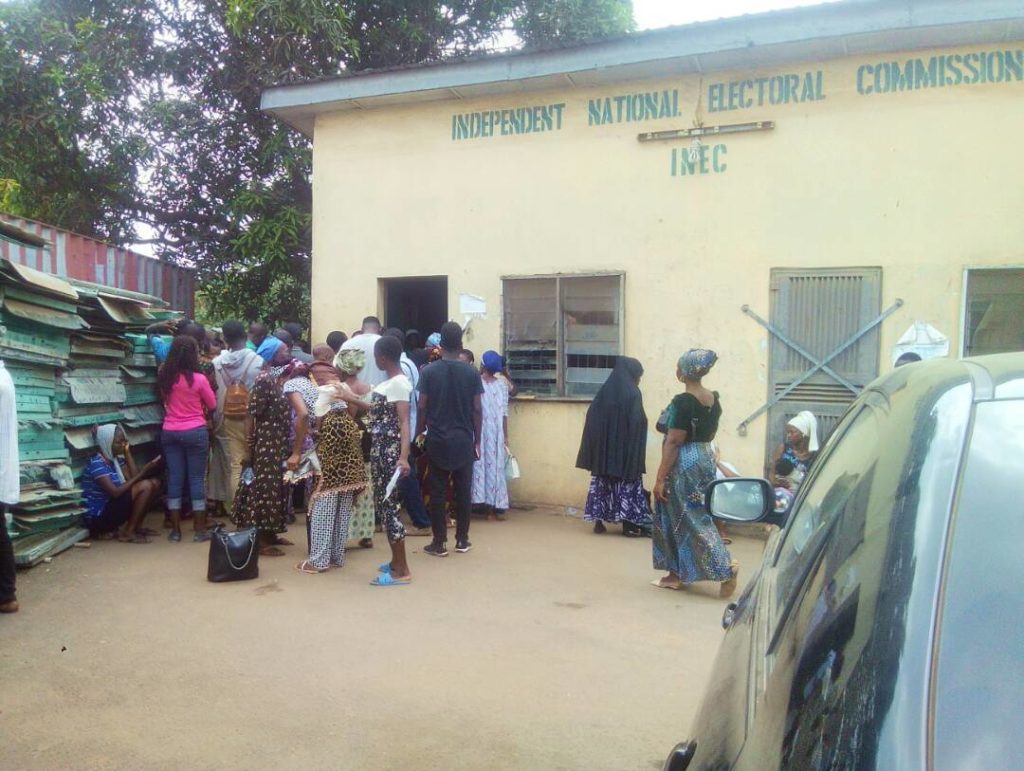 The SI4DEV Oyo Ibadan Group embarked on a 4-day monitoring and evaluation exercise on INEC voters registration by visiting 5 LGAs in Ibadan. The exercise was carried out by Mr. Anietie M. Umoren and Engr. Ms. Ako Oku.

INTERVIEWING INEC ELECTORAL OFFICERS
We could only assess the Assistant Electoral Officer (AEO) of Ibadan North LGA. At other Local Government INEC offices, we were told that their Electoral Officers were not on seat. Other INEC officials present however, declined speaking with us on any matter, saying only the EO could do so. At Akinyele LG, where we were assured that the EO would be returning soon, we left after waiting for 1hr 30mins in futility. 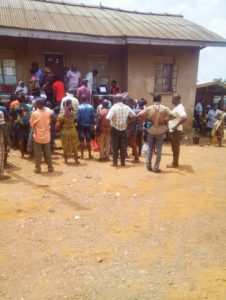 QUEUING PROCESS/DURATION
The queuing process generally request people to come on time and write down their names on a list, which would be used to call them up later to collect their biodata form. On submission, they wait in the queue again, awaiting their biometrics capturing, after which they would be given their temporary voter card. However, in some locations, the process lasts longer. At Ibadan North-East, registrants reported that they come days earlier to put down their names on the list and are given specific dates to come back for continuation of the process. Some person at Akinyele LGA testified that they did same. At Ibadan North and Ibadan North-West, registrants could complete their registration in one day. 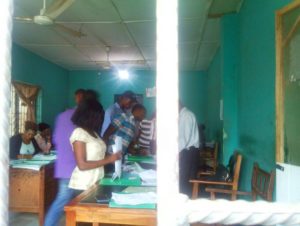 REACTION OF REGISTRANTS
At Ibadan North and Ibadan West, registrants seemed to be contented with the exercise and conducted themselves in a composed manner. They also said that they were contented with the attitude of the INEC staff. However, at Ibadan North-East, people on the queue were seen to raise their voices and complain bitterly stating improper coordination of the exercise, while at Akinyele they complained about registration officials giving preferential treatment to persons they know by registering them before those who came earlier than them.

REGISTRATION EQUIPMENT
It was observed that all the LGAs had only one computer system. The INEC official at Ibadan North disclosed that 3 systems were given to each LGA for the purpose of data capturing, but while one is permanently stationed at the secretariat while the other two are taken round for voters registration at wards under each LGA. During our visit to Ibadan North, the system in use developed a fault and was replaced by another about an hour later. Registrants at Ibadan North East also reported that a similar incidence occurred a day to our coming. 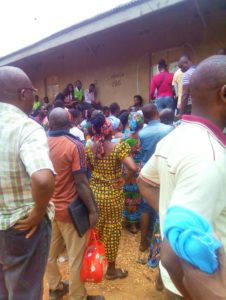 CHALLENGES ON GROUND
Two main obvious challenges on ground are insufficient working equipment and lack of conducive environment for registrants. On the later, the AEO of Ibadan North admitted that most INEC LG offices lack sufficient space and shelter. At Ibadan North and Ibadan North-East, registrations were done in the open, exposing people and equipment to sun and rain. We met an unfortunate incidence at Ibadan North, where a registrant fainted due to congestion and exhaustion, only to be resuscitated by a health worker. There were also rare points for sitting in the offices visited, making people stand for several hours.

ON ACCEPTING ASSISTANCE
The AEO disclosed that assistance could not be accepted at the local government level without a permission or approval from INEC headquarters. She said any organization willing to assist or partner with INEC for registration purposes must take the proposal to their national office at Abuja and that State or Local Government offices have no authority on any of such issues. 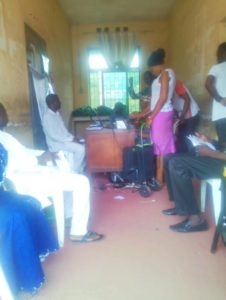 OTHER REGISTRATION ISSUES
Generally, those who lost their voters card or who registered before last election but did not receive their cards did not encounter waiting issues. They were asked to put down their names on a separate list and asked to come back on a day to collect their temporary voters card.

NUMBERS OF PEOPLE REGISTERED
The AEO of Ibadan North said that since this phase of registration began in April 2017, they had registered about 13,000 people. The number of people registered at other LGAs within this period could not be known as their Electoral Officers were not on sit when we visited.

ON APPLICATION WINDOW
We gathered that the application window for this belt which began in January 2018 would end by March 23. The break would be for two weeks after which another batch would commence.

PERMANENT VOTERS CARD COLLECTION
The AEO of Ibadan North assured that permanent voters card for new registration and other issues will be available at least 60days to the 2019 INEC general elections. This she disclosed is the position of the INEC, adding that the commission is optimistic that every issue surrounding voters registration would be treated within this time frame.

STAFF ASSESSMENT QUESTIONAIRE
The tool could not be used as INEC staff at various centres declined attending to us without the permission of their Electoral Officers who were mostly absent. At Ibadan North, however, the Assistant Electoral Officer admitted that the staff were too busy to engage in an interview session with us. She however summarized that they were ICT-compliant and executed their jobs efficiently.

OBSERVATIONS
Having visited four LGA INEC registration centres, we perceive the rest uncovered LGAs would have similar conditions. Basically:
1. INEC registration officials are often on seat and attend to registrants at their own pace
2. The exercise usually commence by 9 am and ends by 3pm at all centres
3. Prompt efforts are being made to solve technical challenges on time
4. The number of people registering for voters card at this time has generally dropped, when compared to that of the last batch or previous weeks. This is due to the fact that many people have already registered.
5. Where LG are located in residential areas there is higher turnover of registrants while those situated at commercial areas have low population of people turning up for registration.
6. Consideration is not given to the population density around LG secretariats areas before disbursement of registration equipment. Residential areas should have more than one computer system for registration.
7. Not much is known about registration at the wards and how two systems are moved around to serve all wards within each LGA.
8. Considerations are barely given to the comfort of registrants. Space, shelter and resting places are not considered. This could turn off prospective registrants when they find long queues and unfavourable environmental conditions. However, preferential treatments are given to the aged, people with disabilities and pregnant women.
9. INEC staff decline disclosing even the slightest information, while their EOs are hardly on seat to speak with us.

RECOMMENDATIONS
1. For LGA secretariats located at residential areas, more than one computer system should be provided to reduce the waiting time of registration process due to high population.
2. Back-up systems should be in place to stand in where systems used are in a less functional state.
3. Provision should be made for space, shelter and comfort positions. More chairs or benches should be provided.
4. Staff involved in the registration exercise should come up with more orderly and smarter techniques in executing their duties
5. Electoral Officers should always be at their duty posts to oversee their offices and attend to issues. Other staff should be able to help with simple enquiries.